A Brief Guide to Hydraulic Equipment 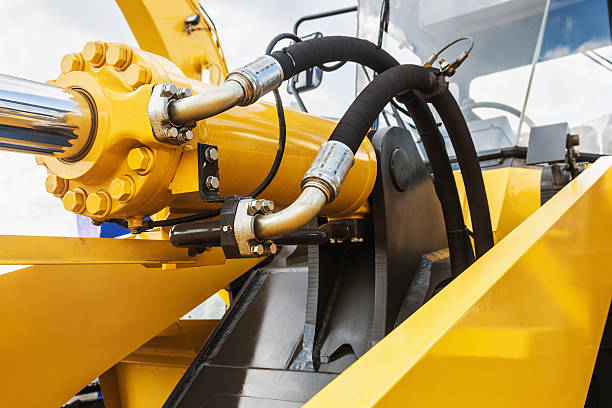 Hydraulic equipment performs a variety of machining processes using pressurised fluid. An engine or motor operates a pump that pressurises hydraulic fluid in hydraulic machinery. This fluid then flows to the machine’s actuators through hydraulic tubes, where the fluid’s pressure finds its application.

The pressurised fluid then passes through a filter before returning to the pump. Hydraulic fluid is often made up of mineral oil polyalphaolefin or organophosphate ester, although you can also employ other chemicals.

Although hydraulic systems used in hydraulic companies have various other benefits, four major ones are as follows:

The flow and pressure of a hydraulic pump transform mechanical energy into hydraulic energy. Hydraulic pumps produce a vacuum at the pump’s inlet and force liquid from a reservoir via an intake line to the pump. The hydraulic system forces the passage of the fluid by mechanical action, which transfers it to the pump output.

The function of a hydraulic motor, which is a mechanical actuator, is to convert hydraulic pressure and flow into torque (or a twisting force) and ultimately rotation.

A hydraulic cylinder is a device that turns the energy contained in hydraulic fluid into a force that you may use to drive the cylinder in a straight path. It, too, has a wide range of uses and can be single or double-acting. As part of the overall hydraulic system, the cylinders start the pressure of the fluid, and a hydraulic motor controls it.

Different means of decreasing pressure on the pump are the open and closed hydraulic systems. This will assist in reducing wear and tear.

The pump in an open system is always on, pumping oil seals through the pipes without creating pressure. There is a connection between the pump’s input and return valves to a hydraulic reservoir. Because the control valve’s centre route is open when it is neutral, these systems are sometimes known as “open centre” systems. Hydraulic fluid returns to the reservoir in this situation.

The fluid from the pump passes through the device before returning to the reservoir. You can include a relief valve in the circuit to direct any surplus fluid to the reservoir. Filters mainly help to keep fluids clean.

The return valve is directly connected to the hydraulic pump inlet in a closed system. The fluid moves in a continuous loop by a single central pump. A valve also diverts oil seals away from the pump and into an accumulator, where it remains pressured. Oil is still under pressure, but it does not move until triggered.

A charge pump supplies cool, filtered oil to the low-pressure side. This step maintains pressure within the loop. A closed system, which employs one pump to power numerous systems, is commonly utilised in mobile applications with hydrostatic transmissions.

Now that you know what hydraulics are, you can see that hydraulics have vast applications in various hydraulic companies and in all sorts of different components of the machinery that runs construction, transportation, and more.